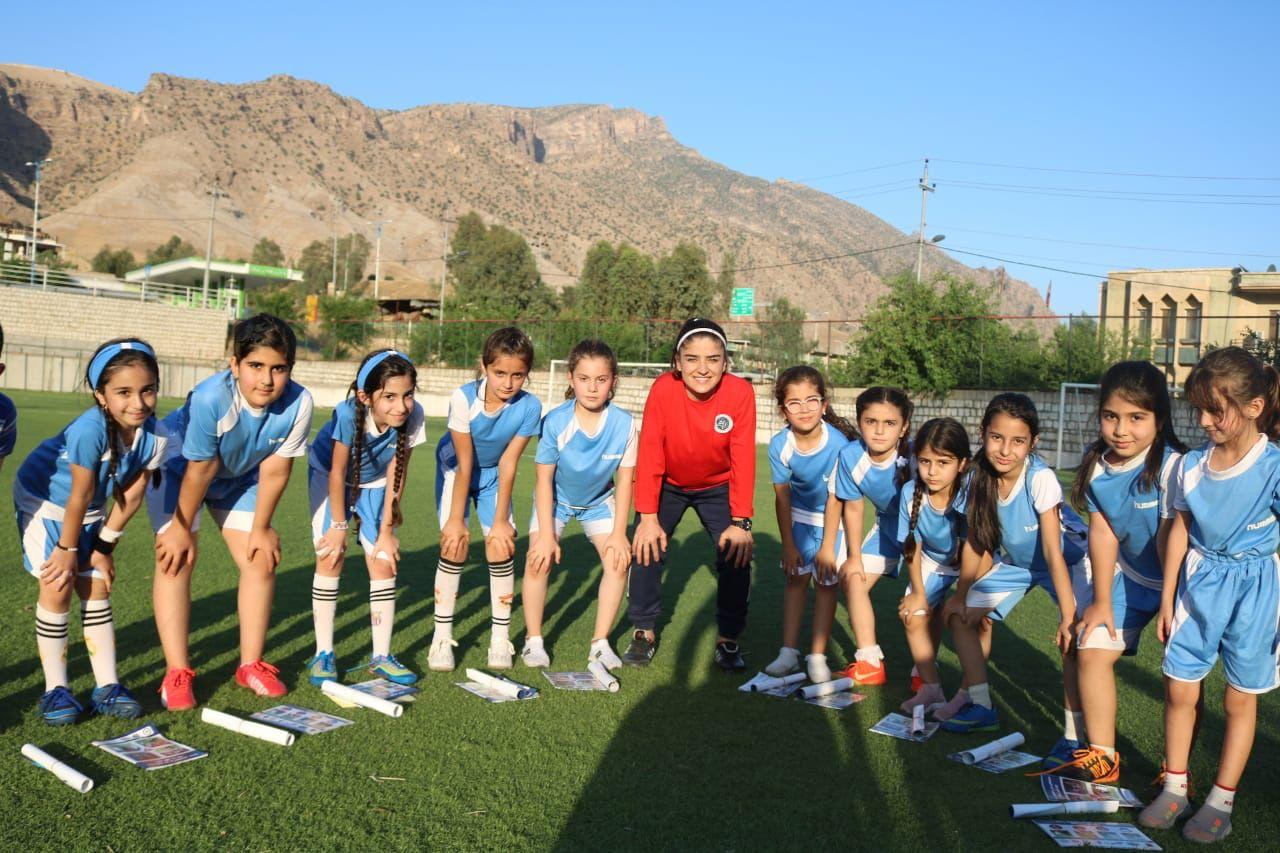 Berivan Jalal Rashid, a graduate in Physical Education from Halabja, Iraq, joined Spirit Of Soccer back in October 2020 with two goals in mind:

1. to support and develop football participation among Halabja girls;

2. to work as a session coordinator and football coach in Spirit of Soccer in order to improve skills and techniques, and to use this to raise awareness among her immediate community about the dangers of Explosive Remnants of Wars and Landmines.

These noble causes are all the more poignant in light of the city’s tragic history: During the Iran-Iraq war Halabja City, which lies in the North-East region of Kurdistan, was the scene of a genocide committed by Iraqi forces under Saddam Hussain. On the 16th March 1988, following 2 days of conventional blanket bombing, a chemical attack was launched causing 5,000 deaths in the immediate aftermath with a further 7,000 casualties afflicted with long-term illnesses. The atrocity effectively razed the city to the ground and left the landscape littered with Unexploded Ordnance (UXO) for years to come.

Back to the present day and Berivan’s goals… To help realize the first of these, SOS financed the set-up of Berivan’s very own football institute for young girls, the “Bryar Football Institute”, which now boasts 25 female players between the ages of 8 and 18. Understandably Berivan has become a heroine to these girls, focusing her time on spreading the love of football coupled with SOS’s specially designed programme with EORE messaging to them and their families.

With traditional religious values prevalent in the community her passionate message is not without challenge.

“I face many obstacle with my student’s parents to let their girls start and continue their football path. Many of them mention that they’ll withdraw their kids out when they grow up but my duty is to convince those parents and community members that football is also for girls and that this generation has greatest future ahead in sports…”

A talented footballer herself player, Berivan was one of nine Kurds selected for the Iraqi national squad who went on to beat Saudi Arabia 4-2 in the final of the West Asian Women’s Futsal Championship Final held in Jeddah, Saudi Arabia – A result she proudly broadcasts to validate her message:

‘… this only can be proven with my success – to be an icon for my players and their families in football – so I can prove that yes a girl from Halabja can win the Asian Cup in football” she continues with a smile.

In working with Spirit Of Soccer Berivan also ensured the second of her goals. She obtained her Master’s degree in Sports Physiology back in 2021, obtained her (AFC) Asian Level ‘C’ and ‘B’ Football Coaching licenses soon after and has since coordinated numerous seminars and workshops on an international level.

“In encouraging her to take part in many face-to-face training sessions, hosting various online seminars and workshops, Berivan has become a devoted coach, sincere in her duty and an integral part of SoS – a role model for her football students and the wider community in developing football skills and delivering the humanitarian message of EORE. “Said Mohammaad Al-Naqib – the Country Director of Spirit of Soccer in Iraq.

Following their victorious final, Bevain leaves us with a few more words of motivation:

“We were able to achieve this great success with one spirit – players hand-in-hand – with the skills of the coaches to guide us in serving our country… I offer this victory to all Iraqi women and tell them not to give up and to continue, and you too can introduce Iraq to the world under the name of football...”

Spirit of Soccer promotes female inclusion and is a staunch advocate of womens football development and their involvement in communities in most need of assistance.
The main goals of the SOS programmes are to:
–  Promote football among women and young girls in order to empower the role of female players and help them realize their full potential.
–  Provide the ball and arena for female players to pursue their goals by using football as a means of empowerment, working for health and welfare, women’s rights, and education.